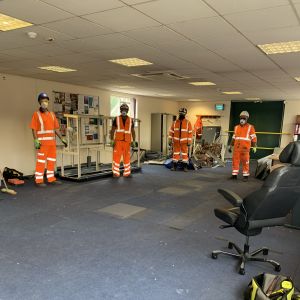 Haigh Rail has supported the successful commissioning of Ditton, over a busy bank holiday weekend for the team. Ditton is the final stage of the Weaver to Wavertree Resignalling Scheme, where Haigh Rail has been engaged as a delivery partner since 2017 for their client Siemens.

Over the weekend, Haigh Rail’s in-house Track and Welding Divisions installed and recovered several Insulated Block Joints (IBJ’s) including all welding and stressing – during this project Haigh Rail has installed 31No new and recovered 222No IBJ’s.

The entire track scope of works has included S&C Abandonments – a set of traps which were plain lined – and track circuit works covering heavy maintenance, including the renewal of ballast, sleepers and components. Haigh Rail’s works have also included 14No Point End conversions from HW and Mechanical POE to Clamp Locks.

Haigh Rail also installed final OLE bonding in 16No locations along the route and undertook some last-minute bonding changes too, when the final MOD was issued.

Haigh Resourcing, the Civils Division of Haigh Rail, were also involved, successfully completing 4No LOC recoveries along the route and then making good the areas that were recovered.

The Civils team also undertook a strip out of Ditton Signal Box Panel – once it was fully decommissioned by the Siemens T&C team.

Haigh’s Vegetation Management team were also involved, carrying out de-vegetation works in multiple areas around PZTs, LOCs, and signal and speed board sighting areas. They also completed some further preparation works in advance of an upcoming piece of work.

These multi-trade works were fully co-ordinated by Haigh Rail’s management and supervision and the company is pleased to say that there were no accidents or incidents.

Managing Director, Chris Haigh, was heavily involved in this weekend’s work and send his praise to all involved:
“A great team effort, with Haigh Rail and Siemens teams working in harmony – planning work together, collaborating effectively and delivering safely.”