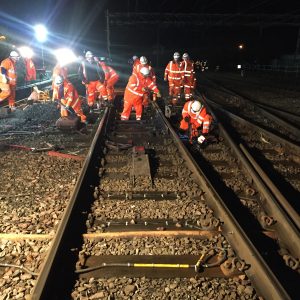 Haigh Rail was contracted through Network Rail and Siemens Rail Automation Holdings to provide a range of track renewal and track maintenance works for the re-signalling project at Gresty Lane in Crewe (GRIP 5-8). The works were successfully commissioned during the nine-day blockade from 28th November to 6th December 2015.

As is increasingly the case, we were involved early in the development, staging and planning of the track works. This ensured greater ownership, leading to a more successful delivery in all areas. It also created a culture of collaboration in which all parties were consulted throughout the progress of the works. Haigh Rail is an advocate of BS 11000 and embraces the principles encompassed by the standard.